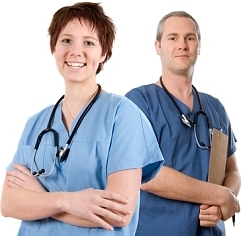 I am embarrassed to say that not only did I not think of the problems that could be caused by taking out a student loan and not being able to pay it back promptly, but I also did not read all the literature that came with the student loan packet I received but just put it aside. At first I thought it was irrelevant to read. After all, I was going to get a medical assisting job that paid well and the loan would be taken care of in no time. After awhile though, when it became clear that I was stuck jobless and with a bill every month, I just didn't want to think about it, much less look at that packet. For the past few years the packet had been buried somewhere but recently I hauled it out for something and skimmed through the booklet "Repaying Your Student Loans". I came upon an interesting section about discharging or canceling a loan. I had never heard of this before but apparently, performing volunteer work can help with paying it off. Does everyone know this? The volunteering involves working with the underprivileged , mostly children. Since I was not about to go overseas, joining the Peace Corps is out but I did a search of available VISTA (Volunteers In Service To America) positions in this area and there seems to be plenty of openings. I wish I had known this before because over 1000 hours is required to pay off over $4000. So you would be looking at a year of doing this but it would be well worth it on several levels.

Has anyone tried this, or would consider it?

Are You Still In School? Not in 5 years

Are You Working? Obviously, no

I don't want this to become a political views, and preference debate, or Republicans vs. Democrats and such... so I keep it very short: "You can thank President Obama for this one!".