I wonder if a joint investigation with Reed and Malloy was ever considered. If it did happen wonder if it would have worked. Only 1 episode though. Adam 12 was most enjoyable. Thoughts?

q
quid_quo_pro
Re: Columbo and Adam 12

I think a Dragnet tie-in would be more interesting. Can you imagine?

Friday: Just the facts…
Columbo: Just one more thing.
Friday: Umm… can we just get to the facts…
Columbo: How much did you pay for those shoes?
Friday: …you have a right to an attorney….
Columbo: You know, my brother-in-law’s an attorney. Real smart guy.
Friday: It was hot that day...
Columbo: Oh yeah, I remember! Wanted a cold one and the icebox gave out. Nothing worse than a warm beer.

Because of rank, poor old Friday would have had to bite his tongue, but you know he would really want to give one of his "Listen hear mister" lectures! :slightly_smiling_face:

Well, as an alert fan (Bryan) pointed out in 2014, at least Columbo's car was in Adam-12 -- in an episide called "Citizen All." Even Columbo's license plate was visible, so....he was lurking around somewhere! 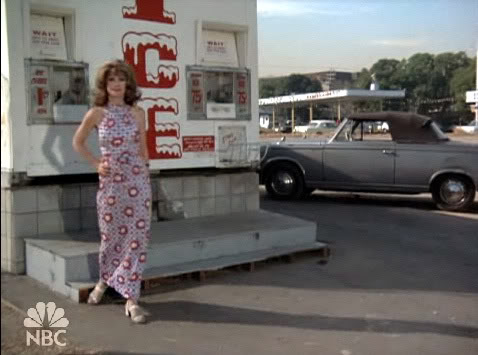 q
QUIQUE
Re: Columbo and Adam 12

Nice catch, Ted. Thank you. Columbo´s car had too many work in those days.

Salutes to everyone (including the Commodore).

PS: Ted, if it's possible, I'll be interested in contact you by mail. My address is enriquealmarazluengo@hotmail.com. Thank you and regards.

I barely know Adam-12, but even without Columbo's car, that still is very interesting.

Heh, well it's a bit of a mystery considering I took the screen capture myself and now I can't locate the scene. The original tip came in 2009 from the Forum's old pal Headache2112, who wrote, back then:

"I've been watching episodes of Adam-12 on the Hulu website. Knowing that both Adam-12 and Columbo were Universal properties, I thought there was a good chance that Columbo's car might turn up in an episode.

Season 4, Episode 14, "Citizen's All" begins with Officers Malloy and Reed responding to a call of a motorist in distress, the victim of a smash and grab.

Adam-12 pulls up next to a woman in a wacky dress standing next to a gigantic Ice Machine. Right there in the background is Columbo's car. In the episode, it's the woman's car. We don't get much more of a look at it, but she does complain about what the thieves did to her car.

Check it out on Hulu.com. Click on TV, then Browse. Adam-12 is listed alphabetically. Again, it's Season 4, episode 14.

The car is only seen for the first segment, so don't bother looking for it later in the episode.

It made me smile!"


This morning I found the episode here:

but if the ice-machine lady's scene is in it, I didn't spot it. Could be it was just one of those wacky, throw-away scenes they had, and it got cut from the version at the above link. I probably paid to see it on Hulu back in 2009, just to get the picture! :smile:

g
Grant
Re: Columbo and Adam 12