I hope everyone has stayed well this year. It's been a pleasure to see all of you here in the Forum, and we all look forward to good times to come. Each year since 2001, we continue the site's holiday tradition with my little tribute poem, that I sent to Peter Falk. He sent such a great reply, and it is always fun to share this with you. Merry Christmas and Happy Holidays, everyone -- Columbo fans are the greatest! 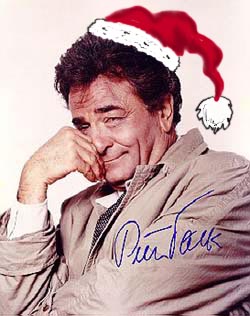