Look 4ward to this each year brilliant!!

The forum has gotten very slow as of late; wonder why?

Yes, Fred, I've noticed the same thing. Very few posts, some interaction (responses) but generally not a lot. I like the "Columbophile" site, too, but I prefer here because of the more active discourse/discussions. Hopefully, 2022 will bring more chatter!

I enjoy this very much every year. I never scrolled back far enough to see the response from Peter Falk, that's fantastic! You should re-post that here to bring it to the front.

I do similar rhyming poetry myself, a "what have we done this year" poem in similar style. I've been doing it annually since 1999. The last 6-7 years have been aided by a website rhymezone DOT com; check it out! It's extremely useful and provides both rhymes and synonyms.

(I tried to use the URL tag to link to it, but it appears this site blocked my post when I did so).

David, thanks for your kind comment. I hope you had a great Christmas. Below is the reply I got from Peter Falk. Part of it refers to my "appearance" when he gave a great interview on "The View" with Barbara Walters, and I was invited to ask him a question from the audience. I was dressed in complete Columbo costume (as he was), which I swear was at the specific request of the show's producer, and Peter describes how he felt a relief as the burden of full focus shifted from him for a few seconds. Of course he is being kind. As to his idea to have someone read the poem aloud at his upcoming wedding anniversary event, well who knows if that ever happened, but it sure was nice of him to say this. Peter had a certain reputation for how he behaved on set in his younger days, but he was very gracious to fans as you can see. 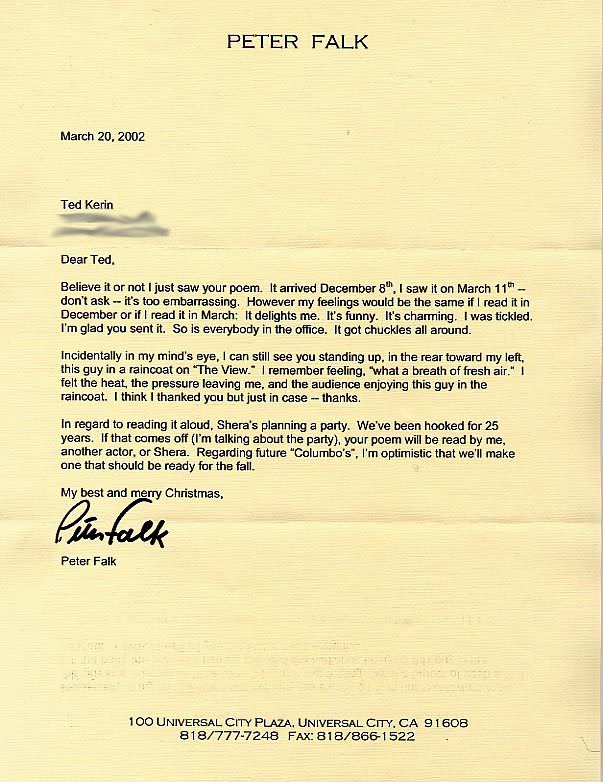 What a wonderful, thoughtful response from Peter Falk. And thank you for sharing that very personal moment here. It certainly is an entertaining poem and helps to keep the spirit of Columbo going around here. It must have been quite touching for him to recognize your thoughts and efforts. Cheers!