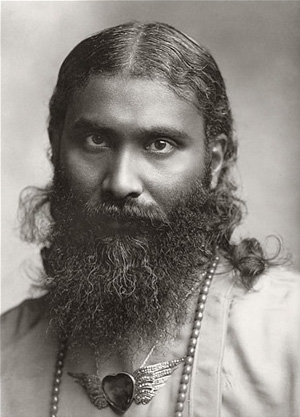 One hundred and thirty five years ago on this day, the 5th of July, 1882, Inayat Khan Rehmat Khan Pathan was born in Vadodara Gujarat. He is more commonly known as Hazrat Inayat Khan, Hazrat being an honorific. And sometimes by the title Pir-O-Murshid, which could be understood as senior teacher and head of a Sufi order.

Inayat Khan came from a family of poets and musicians. And, critically, he was an initiate within three Sufi orders. Principally he was a teacher within the Nizamiyya sub-branch of the Chisti Order.

In 1910 Inayat Khan came West, touring as master musician. But, he quickly shifted his focus to teaching Sufism. He married an American, and had four children. The most famous outside of his community is probably his daughter Noor-un-Nisa, who was executed by the Nazis as an Allied Special Operations agent during the Second World War.

Hazrat Inayat Khan’s order was one of several emergent spiritualities blending Eastern and Western wisdom to burst on the scene in the early decades of the twentieth century. As an eclectic he developed a universalist Sufism. A significant feature was not requiring people to convert to Islam to study with him or to receive his initiations. This approach, while historically defensible, there was a long tradition in India of non Muslims being accepted into Sufi orders, this practice is, however, not accepted within the mainstream of Islamic Sufism. Reading into the subject one will find some strong denunciations of the movement because of this.
And in looking at the ten principals of this universal Sufism, one can see both why orthodox Muslims might object to it, and at the same time how compelling the message itself is.

1. There is one God; the Eternal, the Only Being; None exists save He.

2. There is one master; the guiding spirit of all souls that constantly leads all followers toward the light.

3. There is one holy book; the sacred manuscript of nature, the only Scripture that can enlighten the reader.

4. There is one religion; unswerving progress in the right direction toward the Ideal, which fulfills every soul’s life purpose.

5. There is one law; the law of reciprocity, which can be observed by a selfless conscience, together with a sense of awakened justice.

8. There is one object of praise; the beauty which uplifts the heart of its worshipper through all aspects from the seen to the unseen.

9. There is one truth; true knowledge of our being, within and without, which is the essence of Wisdom.

10. There is one path; annihilation of the false ego in the real [later alternative; “the effacement of the limited self in the Unlimited”], which raises the mortal to immortality, in which resides all perfection.

While, as I noted, highly controversial within the orthodox Muslim community, his message of love, harmony, and beauty has continued to find resonances ever since. Here’s a delightful account of his meeting with the Zen priest Nyogen Senzaki told by the old priest. I find it an interesting expression of the non dual perspective which I personally consider the living current that informs all mystical traditions.
In 1927, on his first visit back to India in nearly twenty years, he unexpectedly died of influenza. Inayat Khan was only forty-five years old. His principal heir shifted her affiliation to the Zoroastrian born Hindu sage Meher Baba, leaving the remanent of Inayat Khan’s organization in disarray. Eventually Inayat Khan’s sons Vilayat Inayat Khan, and Hidayat Inayat Khan, and the American Samuel Lewis emerged as the principal leaders of Hazrat Inayat Khan’s inheritance.